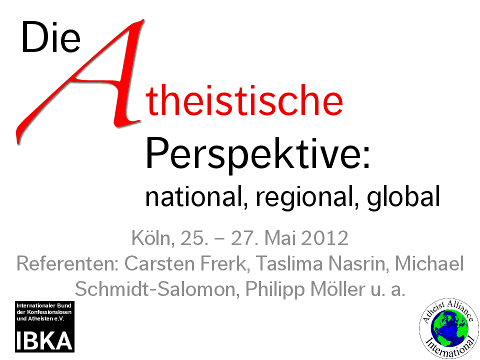 Atheism is on the rise. More and more people are getting organised in groups to promote secularism. In 2012 there will be more atheist conventions worldwide than in any prior year. The publications of the "Four Horsemen" (Richard Dawkins, Daniel Dennett, Sam Harris and the late Christopher Hitchens) in particular have received attention beyond the English-speaking world and encouraged secularists everywhere to advocate for change.

What will the future bring? Can the secular movement become a worldwide power to effectively challenge organised religion? These and other questions will be discussed at the 2012 European Atheist Convention, 25 – 27 May in Cologne, Germany.

In Germany 500 years ago the Protestant reformation commenced, which ultimately ended the dominance of Catholicism in many parts of Europe. But it resulted in a two-religion system that shaped Germany's society for centuries. The divide between Catholicism and Protestantism can be felt still in so-called Western civilization.

Recently things started to change – more and more people turned their backs on organised religion. In Germany, now more than one third of the population is not a member of any church. But the non-religious have not yet achieved recognition as an important factor in society and politics.

Will the recent rise of atheism and secularism change this? Is the secular movement too fragmented to accomplish anything substantial or is its diversity a strength? These questions, and many more, will be discussed at the 2012 European Atheist Convention.

In cooperation with the Giordano Bruno Foundation.